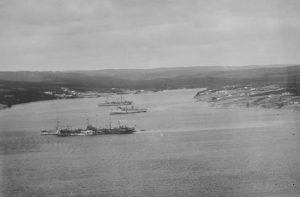 In May 1919  (100 years ago)  the international press and aviation enthusiasts throughout the world  were all very interested in what was happening in Trepassey, Newfoundland.

“Never before in its uneventful history has the small settlement of Trepassey been filled with such excitement as today permeates that place. For from a vague idea of what the much talked of Transatlantic flight is, the little village has in a flash become a very centre of operations, and already the people there have become used to the sight of nearly a dozen American cruisers anchored in the harbor.“

On May 6 the residents of Trepassey sat on the banks overlooking the harbour to witness the arrival of a two American naval vessels.   They were unannounced and unexpected. On Saturday morning two more vessels anchored in the harbour. Before the end of the week there would be a dozen naval vessels  with a crew of approximately 8,500.

“The furor caused by the entirely unexpected arrival of the U. S. N. “Kistoo” late Friday afternoon, and that caused on Saturday by the arrival of two others, the flagship “Prairie” and the seaplane mother ship,” “Aroostock,” had best be left to the imagination.”

Everyone in Trepassey and residents of nearby St. Shott’s were all up bright and early on Saturday morning – all gathered in small clusters trying to figure out what was happening.   It was eventually revealed

“ a seaplane was lowered to the water and, running along the surface for a short distance, ascended into the air and went circling off over the harbour and village”. 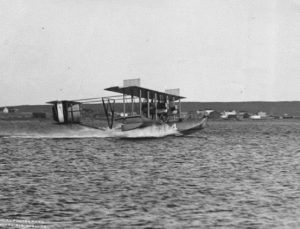 NEVER SEEN THE LIKES BEFORE

There was much excitement – never had anyone in Trepassey seen a flying machine in the skies before.

“As in the case of the Martinsyde biplane’s test flight, the gulls and other sea birds that were peacefully floating on the waters were startled out of their calm and flew away to safety out of reach of this new manner, of bird that had invaded the quietness of the placid air of the port.

The gentle sheep, the more spirited goats and the virile ponies that browsed along the grassy slopes of the immediately surrounding country were panic-stricken at the sight of the seaplane and more so, perhaps, at the unearthly sound of the powerful motor, and for a long time after the flier had dropped back to the harbor they capered madly about the fields and the winding lanes that constitute the roads of the village.

Not less than the animals, it must be admitted, the people themselves were shaken out of their customary staidness, and for hours after they met in little groups and discussed this new wonder that had come amongst them, and a most amusing feature of these conferences were the wild hazards of the natives as to what “drove” the plane and what kept it in the air. This problem has not been solved at Trepasey yet. “

At about 1.30 the seaplane made another flight, circling over the harbour for about half an hour. The inhabitants now lined up along the beach, and although not so excited as on the day preceding they were just as interested as ever. 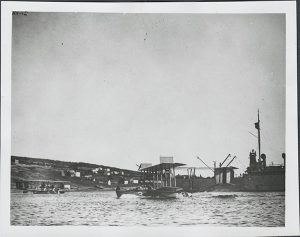 The U. S. Navy were attempting   to cross the Atlantic by air using four seaplanes of uniform type.   The flying machines chosen were the Navy-Curtiss machine, built by Curtiss with the cooperation of the Navy; all fitted four Liberty motors, and four propellers.

The plan was that on the voyage across the Atlantic the planes would fly together keeping in sight of each other all the distance.  The navy vessels in Trepassey were to depart Trepassey  Harbour  and were to be posted  along the route with  a total of fifty-seven other ships all along to the Azores, being situated fifty miles apart. Thus, when the seaplanes left Trepassey, flying for the  Azores they  would at no time be more than twenty-five miles away from a cruiser.

Upon arrival at the Azores they were to refuel and begin the fourth leg of the flight, going to Lisbon, in Portugal. Refueling there  and then the fifth and last leg at Plymouth, England.

TREPASSEY FEELS A PERSONAL INTEREST IN THE FLIGHT

The crowd from Trepassey were quick to claim very personal connection to the newly arrived Americans   – they discovered that aboard the “Aroostook” was Lieut. Richard James who laid claim to Trepassey roots.

The locals were quick to tell the reporters   that  Lieut. James was born in Trepassey, but left there some thirty years ago.  (1890’s)   the newspapers reported:

“His occupation before Trepassey left him with a minute knowledge of the harbor, and it was he who piloted in the other ships on upon arrival here. There are several people who remembered the old native, and the entire village, needless to state, is proud of him. The fact that, after thirty years absence, he could successfully pilot the cruisers in the harbor, is a high tribute to the knowledge and skill of Lieut James. “

With the population of  Trepassey at approximately 800 what were they to do with 8,500 visitors?

The people of Trepassey wanted to show the men on the navy vessels a good time. The hand of hospitality was extended to them all.  The Telegram reported:

“Last evening a dance was held in one of the houses, several sailors being present, while numerous individual men were invited out to homes in the village.

Newfoundlanders have always been noted for their hospitality and kindness to strangers, and when, Saturday night, the likeable Yank sailors came ashore in quest of adventure and other things, they were  treated with the customary kindness and consideration for which outport people are so famed.

The sailor boys were a “little” disappointed over Trepassey,—for even to the most optimistically minded, Trepassey is not a very modern city—and altho careful not to say this or anything else that would give offence, their long faces told their own story. To make matters worse, the weather, although delightfully clear and fine, was exhilaratingly keen and having recently returned from Cuba the Americans felt the cold pretty badly.

The one and only shop was besieged and raided and every stick of gum, every cigarette and every drink that was in the place absorbed.

Postcards were in demand but here again the postcard fiends were doomed to disappointment.”

One of the naval officers Mr. Balcon S. Bond, the Chief Radiograph Officer of the U. S. S. Prairie, wrote:

“Fishermen would take us in parties from our ship and show us around the district. In fact, I cannot begin to tell you of some of the good times we had in dear old Trepassey and I am sure that the village will never be forgotten.”

“Many homes gave us suppers for the small amount of fifty cents, and it was some supper. About  four good fresh eggs, a large piece of ham, as many cups of coffee or tea as you could drink, and good old home-made bread and butter. If you were to call for a supper like that in New York, I am sure it would cost you two and a half dollars easily.” 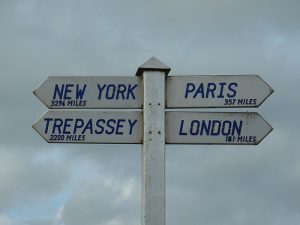 TREPASSEY IS NOT A SECOND NEW YORK

“The fact is, Trepassey is not a second New York, and nothing but the very necessaries of life are sold there.

A number of sailors who had missed the last boat going to the ships, moored about a quarter mile off the shore, were taken in by people of the village and spent their first night in Newfoundland domiciles.

Sunday morning came in bright and fair and although a rather high N.W. wind blew during the day the sun shone out warmly and the weather was not altogether bad. Again a large number of sailors were given shore leave, and the Roman Catholic Church, the only one in the place, was filled to capacity at both early and late services.

During the day Trepassey was gaily bedecked with flags of all descriptions, flown in honor of the visitors, while the hurrying sailors and sight seeking natives, swiftly moving motor boats from the ships, and devout church-goers made a most interesting sight, one whose equal in interest Trepassey has never before witnessed.” 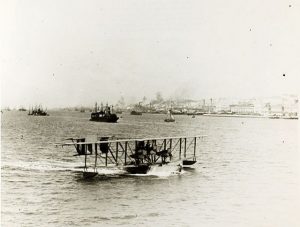 On Friday evening, May 16, three NC boats roared in turn down Trepassey harbor and flew off into the gathering darkness over the Atlantic.

When the naval vessels were passing out of Trepassey many people were seen on the beach, waving, and many fishermen blew three fog horn blasts. In return the  naval vessels  gave three long blows of her whistle.

On May 27,1919, NC-4’s keel sliced into the waters of the Tagus, Portugal. The first transatlantic flight was indeed an accomplished fact.

TREPASSEY WAS PART OF THE FIRST FLIGHT!!

The Rooms: NEW EXHIBIT Opening June 7, 2019     “Second to None: Highlights from the History of Aviation in Newfoundland & Labrador”