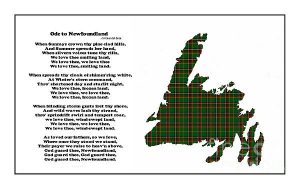 On August 17, 1979, Royal Assent was given to legislation adopting the Ode to Newfoundland as the official provincial anthem of the province of Newfoundland.

The  song  the “Newfoundland”  now known as the “Ode To Newfoundland” was sung for the very first time on January 21, 1902 at the Casino Theatre in St. John’s.  The local St. John’s newspaper, The Daily News, reported that  the new song was greeted enthusiastically.

“Miss Frances Daisy Foster rendered with exquisite feeling a new song entitled “Newfoundland.” It proved a pleasant surprise and the general appreciation of it was marked by the audience joining spontaneously in the chorus.”

The “Ode to Newfoundland” was composed by Governor, Sir Cavendish Boyle, the original score was set to the music of E.R. Krippner, a German bandmaster living in St. John’s but Boyle desired a more dignified score. It was then set to the music of British composer Sir Hubert Parry, a personal friend of Boyle, who composed two settings.

The Daily News reporter knew that he had heard something special  when he heard the ‘Newfoundland’  being sung for the first time , he  wrote:   “he  (Boyle) has given us a poem which may be chosen as the Colony’s own anthem.”

On  June 21,1902  it was “resolved by the Committee of Council that the Ode “Newfoundland”, written by His Excellency Sir Cavendish Boyle, K.C.M.G., Governor of Newfoundland, with the musical setting by Professor E.R. Krippner, be approved, and officially recognized  as the Colonial Anthem.”

That should have been it, all was required was the signature of the Governor.  The Governor however refused to sign. Arthur Mews, The Deputy Colonial Secretary of the day wrote:

“His Excellency (Governor Boyle) from motives of delicacy, did not formally approve the same at that time.”

The “delicacy’ was that  Governor Boyle was  both author of the Ode and Governor, it simply did not look proper that he sign off on his own Ode.

The Premier of the day, Sir Robert Bond, determined  that the Ode  become the official anthem suggested that given the hesitation of  Governor Boyle  that approval be  given by the Hon. W.H. Horwood, C.J. , Administrator of the Government.  But it was not to happen.

By 1904, the ‘Newfoundland’  had become firmly established, in the minds  of most people,  as the “official anthem”  of the Dominion of Newfoundland,  there was no Government function without the ‘Newfoundland’, it was sung at most public gatherings, in parish halls and concert halls.   It was so firmly established  that in the 1909 General Election, Robert Bond proposed that if elected he would be certain  to  make it the “official”  anthem of the country.

Nothing was said of the official status of the Ode until 1972.   Frank Graham in his book  “We Love Thee Newfoundland” Biography of Sir Cavendish Boyle, wrote:

“At an event in St. John’s it was observed that a certain military group failed to observe protocol and the proprieties by coming to attention and showing the proper respect during the playing of Newfoundland’s anthem. The commanding officer was called on the carpet to explain the unseemly conduct of his men.  The officer defended himself and his group  by explaining that there was noting on the statue books to confirm the fact that the Ode  was Newfoundland’s Provincial anthem.  It transpired that he was right.”

In 1974  their was a resurgence of interest in making the Ode official, (driven by Lieutenant Governor, Gordon A. Winter,)  that resulted in the introduction  of the Provincial Anthem Act  for the Province of Newfoundland.  On May 2, 1975 the legislation  became official. It reads:

The Ode  to Newfoundland

When spreads thy cloak of shimmering white

Through shortened days and

and wild waves wash their strands,

Through spindrift swirls and tempest roars

As loved our fathers, so we love,
Where once they stood, we stand;
Their prayer we raise to Heaven above,
God guard thee, Newfoundland

Recommended Archival Collection: Take some time to look at  MG 956.110 at the Rooms;  this cover illustration featuring the Ode to Newfoundland depicts some of the iconic symbols and images of Newfoundland and Labrador. https://www.therooms.ca/collections-research/our-collections