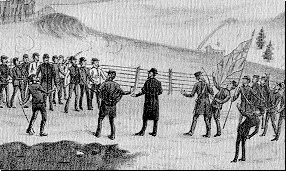 On St. Stephen’s Day, 1883, the hostility that was forming in the town of Harbour Grace between the Protestants and Roman Catholics came to a boiling point. Approximately 400 – 500 members of the Loyal Orange Association held their annual parade through the town.

It was during their march around the town that a group of 100 to 150 Catholic men from Riverhead formed a line in an attempt to prevent the Protestants from passing through the lane from Harvey Street to Water Street because they felt that the Orangemen were encroaching on their territory.

From this confrontation came five deaths and 17 injuries. Resulting from this event, known as the Harbour Grace Affray, nineteen people were arrested and brought to trial.

Due to conflicting evidence and suspected perjury, all charged individuals were acquitted.

Killed in the Affray: