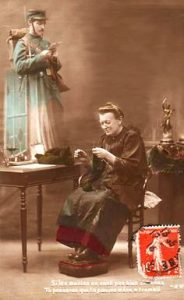 During the First World War women in kitchens and parlors in homes throughout Newfoundland and Labrador were enthusiastically knitting goods, especially socks for the men who had signed up to fight for King and Country. Many of these women were members of the Woman’s Patriotic Association (W.P.A.) an organization of more than 15,000 women from throughout Newfoundland and Labrador.

It is estimated that between 1914 and 1916, the ladies at Government House and from throughout the towns of the colony of Newfoundland produced 62,685 pairs of socks, 8,984 pairs of cuffs (mittens with a trigger finger), and 22,422 mufflers. These items were often referred to as “comforts.”

The socks that were knit were intended primarily for the men of the Newfoundland Regiment but there is evidence that soldiers from other countries including some from Ireland were the beneficiaries of the woolen socks.

In January of 1916 Mrs. Margret Morris of Long’ Hill, St. John’s was thrilled to receive a letter from an Irish Soldier thanking her for socks which he received ‘Somewhere in France’ and found to have been knitted by her. The 85 year old Mrs. Morris was so delighted with the letter of thanks that she strolled down to the offices of the St. John’s newspaper the Evening Telegram to have her story published.

“Mrs. Margaret Morris an old lady of 85 years has received a letter from an Irish soldier thanking her for socks which he received and found to have been knitted by her. His name is Private B. McCourt and he is with (British Expeditionary Force) B.E.F. in France.

The old lady was delighted to receive the letter and hopes to get another from him as he asked her to write to him. He thanked her for the socks she had knitted, said how glad he was to get them and expressed much appreciation at receiving a pair knitted by an aged person.

The old lady had placed a slip of paper in one of them giving her name address and age.”

The practice of slipping a note in the toe of the socks that they knit with their name and address as well as a prayer for their soldier boys was well established among the Newfoundland knitters. Those receiving the socks with the notes were often gracious enough to return a note of thanks.

It is not likely that the old lady did receive any other correspondence from her Irish soldier, she died on March 8, 1916 at her residence on Long’s Hill just a few weeks after the initial letter from him.

Recommended Reading: “A Pair of Grey Socks. Facts and Fancies. Lovingly dedicated to the boys of the Newfoundland Regiment. And to every woman who has knitted a pair of grey socks. By Tryphena Duley. Verses by Margaret Duley.”

Recommended Archival Collection: Distinguished Service: the Royal Newfoundland Regiment in the Great War, this on line exhibition documents the lives and experiences of the province’s soldiers and aims to encourage interest in research on the Royal Newfoundland Regiment. This on line exhibit focuses on the World War I service records of the Regiment, available at the ARCHIVES on microfilm. Some of the service records are on line at: http://www.rnr.therooms.ca/part3_database.asp

Recommended Exhibit:  BEAUMONT-HAMEL AND THE TRAIL OF THE CARIBOU:   Our “Great War” happened in the trenches and on the ocean, in the legislature and in the shops, by firesides and bedsides. This exhibition shares the thoughts, hopes, fears, and sacrifices of Newfoundlanders and Labradorians who experienced those tumultuous years – through their treasured mementoes, their writings and their memories. See more at: https://www.therooms.ca/exhibits/always/beaumont-hamel-and-the-trail-of-the-caribou#sthash.g7eLJMu8.dpuf