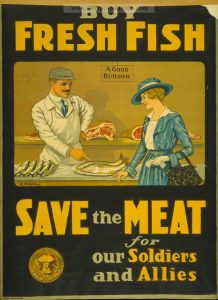 In the early days of the First World War, Newfoundland businessmen began to look for opportunities, especially opportunities to expand the fish trade.

With the declaration of war in 1914 the North Sea, the traditional fishing ground for England was closed. The local papers reported:

“The North Sea fishing fleet has been badly hampered and almost put out of action this season through the menace of mines and the result has been a serious depletion of the fish supply so large a part of the food of the British people.”

The famine assumed such dimensions that Cardinal Francis Bourne, the leader of the Catholic Church in England, granted a dispensation to the Catholics of England allowing they may eat meat on Fridays and Fast Days, the Cardinal explained that the step was necessary because of the high price of fish.

The first group to respond to the famine being experienced in England was the fish merchants of the Pacific Coast of Canada. The Canadians were well placed strategically because just months previous the grand trunk Pacific Transcontinental Railway line had been completed allowing fish from Prince Rupert, British Columbia access to markets in Eastern Canada and the United States.

In an experiment to help feed the British three Canadian express refrigerator cars carrying thirty tons of halibut taken from the waters of the Pacific Ocean off Prince Rupert passed through the city of St.  John, New Brunswick, where the fish was then shipped by the steamship to the British market. The fish would be carried over 6,500 miles before it reaches the consumer.

“ A trial shipment of 20,000 pounds of halibut proved to be successful, when opened in England it was found to be in first class condition leading to the placing of other large orders. “

Newfoundland fish merchants, aware that “large orders” for fish were being demanded by the British people, saw an opportunity. They knew immediately, “that great development in this new trade will continue till the end of the war.”

The new trade resulted in an economic boom, wartime conditions kept prices high, and Newfoundland merchants continued to supply their traditional markets in Europe, the Mediterranean, Brazil and the Caribbean. The boom lasted until 1920.

Recommended Archival Collection:  The First World War had a profound impact on Newfoundland and Labrador. It involved thousands of our people in world-changing events overseas and dramatically altered life at home. Our “Great War” happened in the trenches and on the ocean, in the legislature and in the shops, by firesides and bedsides. This exhibition shares the thoughts, hopes, fears, and sacrifices of Newfoundlanders and Labradorians who experienced those tumultuous years – through their treasured mementoes, their writings and their memories.   https://www.therooms.ca/exhibits/now/beaumont-hamel-and-the-trail-of-the-caribou