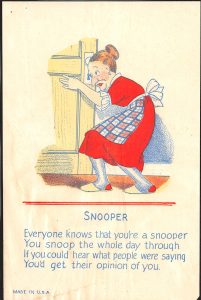 It was Valentine’s Day 1938 and as she did every morning Mrs. Hannah Kelly on Colonial Street, St. John’s, Newfoundland and Labrador picked up the mail and was most excited to find that  she had four Valentine’s cards,  no doubt she thought from admiring friends and neighbours!  But on closer inspection her mood changed, she was furious! She had been delivered four Vinegar Valentine Cards!

Vinegar valentines were commercially purchased containing an insulting poem and illustration. They were sent anonymously, so the receiver had to guess who disliked  him or her; they were often vulgar and even rude.

The vinegar cards that were delivered to 50 Colonial Street, St. John’s were very harsh.

One suggested that Mrs. Kelly was a snooper:

“Everyone knows that you’re a snooper
You snoop the whole day through
If you could hear what people are saying
You’d get their opinion of you. 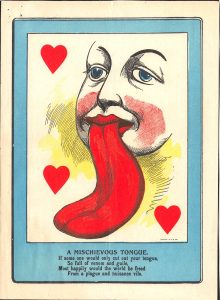 Another suggested that she was a gossip:

“If someone would only cut out your tongue,
So full of venom and guile,
Most happily would the world be freed
From a plague of nuisance and vile” 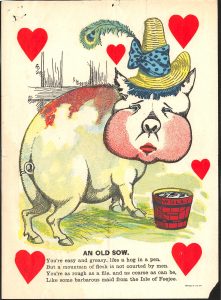 “You’re easy and greasy, like a hog in a pen.
But a mountain of flesh is not courted by men.
You’re as rough as a file, and as course as can be,
Like some barbarous maid from the isle of Feegee” 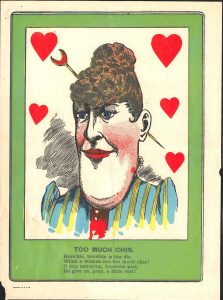 Another suggested that she was not a pretty woman in fact the sender of the vinegar card commented that she had a big chin.

Horrible, horrible is the din
When a woman has too much shin!
Oh you annoying tiresome pest.
Do give us pray a little rest!! 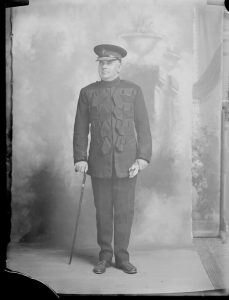 THIS IS A MATTER FOR THEPOLICE

Mrs. Kelly could barely contain her anger; she was not going to be quiet about these insulting vinegar cards! So on a day that should be reserved for matters of love and comfort she immediately called the Chief of Police , P.J. O’Neill.  She followed the phone call with a letter that she sent to his office  (February 15) claiming that she was being  “persecuted”  by her neighbours and that an investigation should be started.

She also suggested that the four “vinegar cards “   that she enclosed in the envelope to him should be analyzed   and that a comparison of the handwriting on the cards should be  made with the handwriting of a few of her neighbours.  She also stated  that  the “leader of the gang” that were persecuting her was  Mable Crocker on 4 College Square  and other neighbours on Colonial and College Streets.

The Chief of Police sent out his detective Constable Reginald Noseworthy to investigate the matter. He obtained the handwriting from five households of those that were alleged to be part of the gang.  A number of individual having consulted with their lawyers refused to give a sample.

On February 23, 1938,   Detective Noseworthy  reported  to the Chief of Police that he was not able to find the culprits – but  was convinced that Mrs.  Kelly was not liked by her neighbours; no one had a good word for her.   He also suggested “she might have sent the Valentines to herself , so that she could have this as a pretext of having a Police Constable call on her neighbours doors, as she is well aware this would cause them some annoyance.”

The vinegar valentines were very popular in Newfoundland the 1930’s  and in in some locations in the country until the 1970’s they were still selling well.

These days, it is much less likely we’ll get a horrid note in the mail as a Valentine’s surprise.