At 10:30 a.m. on May 8, 1945 the siren atop the Newfoundland Hotel, St. John’s, began to wail. This was the same siren that had sounded over the city every Thursday morning since 1939, reminding citizens that we were at war. This time the siren was declaring that the country was at peace! It was the declaration of Victory in Europe Day – VE – Day.

Germany’s unconditional surrender to the Allied Forces on May 7, 1945, ended the Second World War in Europe.

In homes throughout Newfoundland and Labrador families gathered around their radios to listen to a broadcast from the Broadcasting Corporation of Newfoundland (BCN) located on the top floor of the old Newfoundland Hotel in St. John’s.

That morning, announcer Aubrey MacDonald, held a microphone outside the studio window to record and broadcast the noise from the celebrations below in the streets of St. John’s .

His radio audience heard him say: 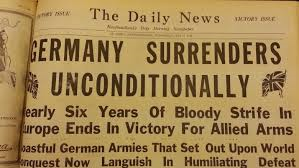 “You are hearing the rejoicing, the unabated rejoicing of our people in St. John’s which has followed spontaneously the great announcement by Prime Minister, Mr. Winston Churchill, that the war in Europe has ceased in an Allied victory …..    Listen to the whistles, the steamers, the church bells, as our people greet them in great jubilation.

The town is bedecked with bunting. Flags are flying. And just now, our people are releasing the pent-up emotions in a torrent of joyous emotion. The war in Europe is over!! Listen to our people show their feelings.

People of nearly every Allied country are taking part in this great celebration today in our city. Cars are scurrying to and from covered in bunting. Men, women, and children are celebrating in a great spirit of unabated joy. The jubilation continues. The celebration is on. There is an aura of complete, unadulterated relief in the spontaneous outburst and the feelings which have so long been pent up are now being released in a torrent of joy. But with all, the predominant note is one of thankfulness — thankfulness to the Almighty who in His divine mercy, has blessed our arms.

As we leave this scene here in St. John’s to which we have looked forward to the past six years we return to the non the less joyous expression of our feelings in the anthems and songs of the empire.

We begin with the national anthem of our own Newfoundland — Britain’s oldest colony — whose sons fought so well and so valiantly and whose patriotic people contributed so much in work and money and toil towards the winning of this long, arduous war.”

All Newfoundlanders stood by their radios to listen to the Ode. 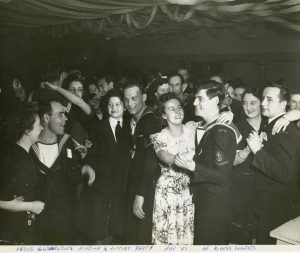 Taking into account service in the Newfoundland Militia, the Forestry Unit and the merchant marine, more than 12,000 Newfoundlanders (the 1945 population, including Labrador, was 321,819) were at one time or another directly or indirectly involved in the war effort. About 1,000 military personnel from Newfoundland and Labrador were killed during the war.

Recommended Exhibit: Here, We Made A Home: The Elinor Gill Ratcliffe Gallery – Level 4, The Rooms.

Listen: Take some time to talk to someone in your family about their experience of World War II. Think about what you want to do with archival material that you hold that is related to the Second World War.