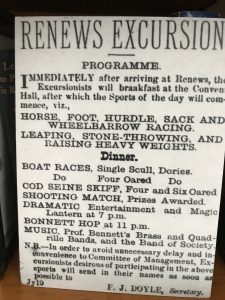 Excursion around the Bay

Advertising for the ‘
Excursion Season’

There was a long established tradition in St. John’s, known locally as ‘the excursion’ that saw hundreds of the citizens of the town make reservations in late April on one of the costal boats or on the train for “an excursion around the bay.”

The first of the excursions began on the May 24th weekend as part of the Empire Day celebrations. Excursions continued well into August.

Typically the excursions were arranged by one of the many societies, associations or church groups for their members. It was for many the social event of the year. A typical ‘excursion’ included an early morning departure by coastal boat or train, arrival in the host community for a breakfast prepared by the local women, a picnic lunch, a walk about in the town, and an opportunity to hike or trout. In some communities a sports day would be, some of the ‘sports’ included horse races, foot, hurdle and sack and wheelbarrow races, shooting matches. The day would end with a comic concert or dance and supper.

The most desired destinations for an excursion were Harbour Grace, Trinity, Witless Bay, Renews and Placentia.

These junketing expeditions or excursions were also occasions for a ‘drunken spree.’

One group that enjoyed the excursions were the politicians. In April 1888 the legislature was closed to allow for an excursion to Placentia. This particular junket came under criticism because “the cost of the said entertainments was being defrayed out of the public purse.”

One critic of these excursions, referred to the excursion to Placentia as “the drunken spree in Placentia.”

For the vast majority however it was a day of considerable fun. Perhaps your organization should plan an ‘excursion around the bay.’

The tradition was so ingrained in the hearts and minds of Newfoundlanders that the term “excursion bread” or “scursion” was coined to refer to a dry sweet biscuit, shaped like a cake of ‘hard tack’ taken by the travelers in their pockets to eat between meals.

Recommended Reading: Excursions in and about Newfoundland during the years 1839 and 1840 by J.B. Jukes.