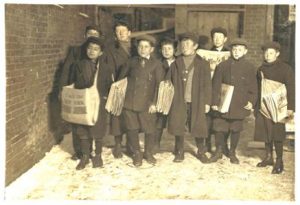 The political reporters that now cover the news at the Confederation Building do so only after considerable thought and reflection on the discussions that they hear in the legislature. It was not always so!!

In March 9,  1881, John Rorke  Sr., a member of the Executive Council (Cabinet) in in the William Whiteway Government lashed out at reporters for the:

“disagreeable manner in which the Reporters furnish (report on) the debates of the Assembly, causing much complaint and dissatisfaction, even to both sides of the House.”

Rorke and other members of the House of the Assembly, located in the Colonial Building on Military Road, St. John’s were suggesting that the bias of the reporters and their newspaper editors was the news.

In the 1880’s the two big “editorial” discussions in Newfoundland were about Confederation with Canada and support for a railway.

The Editors did not mince words, one Canadian Editor wrote about the Editor of the Evening Telegram in a most unflattering manner. He wrote:

“Canada has one determined enemy. He lives down at Newfoundland in the City of St. John’s. He is the editor of the Telegram, that humorously ill-natured sheet, which, as we once before pointed out, has abused everything in Newfoundland that was good for the Island.”

Journalists drinking and playing cards in the ” Reporters Room” in the Colonial Building.

As the Editors sniped at each other the reporters in The Reporter’s Room, located in the basement of the Colonial Building were often distracted from their journalistic calling.  In a letter to the St. John’s paper the Evening Telegram, on March 14  one  ‘Eye Witness‘ to the shenanigans of the Reporters  wrote:

“Now, Mr. Editor can this be wondered at when it is well known that the Reporters Room has been used, not so much for quietness, in getting up their reports, as for smoking, drinking and card playing, “draw poker” in particular, some members of the Assembly and even outsiders, entering into the spirit of such doings”

Imagine the shock to the public to discover that the Reporters Room in the basement of the House of Assembly in the Colonial Building was being used for “smoking, drinking and card playing…”

What were these journalistic thinking?

Why is there no ‘Reporters Room’ in the Confederation Building ?

Recommended Museum Visit:  At The Rooms Provincial Museum visit the exhibit ‘Here, We Made a Home’ in The Elinor Gill Ratcliffe Gallery – Level 4. This exhibit highlights some of the events associated with the political history of Newfoundland and Labrador.