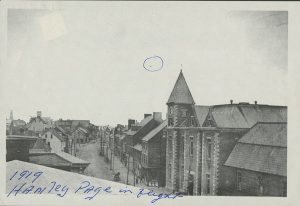 Four teams were in the country (now province) to compete for a prize of $10,000 and a place in aviation history. They were the team of the Australian pilot Harry Hawker and Scottish navigator Kenneth F. Mackenzie-Grieve; the British aviators Frederick Raynham (pilot) and C.W.F. Morgan (navigator); the British aviators John Alcock (pilot) and Arthur Whitten Brown (navigator and the Handley Page Company Group, led by British pilot Mark Kerr, Handley Page was a British aircraft manufacturer.

On June 10, 1919 residents of Conception Bay and St. John’s were treated to a test flight by the Handley Page Company Group, led by British pilot Mark Kerr and Major Brackley .

“The Handley- Page plane made a splendid take off on Tuesday afternoon. The wind was westerly, a moderate breeze, and the machine took the air in less than one hundred yards, having reached the height of 2000 feet, she was headed for St. John’s, across Conception Bay, passing over Bell Island at an altitude of 3000 feet, and reached St. John’s in twenty-five minutes. The distance from here to St. John’s is twenty-five miles in a direct line.”

Having reached St. John’s, the aviators circled over the city for ten minutes, then headed westerly, passed along the south side of Conception Bay for thirty miles, then turning northeasterly, flew along the coast line, passing over the settlements and towns along the north side of the bay from Holyrood to their destination at Harbor Grace.

The weather was ideal for flight, the sky being cloudless, the sun shining warmly and visibility good. The flight was witnessed by the majority of the residents of the Conception Bay towns, and the machine was clearly outlined against the horizon and presented a novel sight to the people of the whole coast, both sides of Conception Bay, many of whom saw a plane in flight for the first time.

The people looking to the skies were fascinated. The St. John’s Daily Star reported:

It seemed as if the crew  desired to give the inhabitants of Conception Bay towns an opportunity to see the huge plane on the wing, as he traversed a course returning to Harbor Grace best calculated to accomplish this object. Whether this deduction is correct or not, it is construed by many; and doubtless the residents along the Conception Bay settlements appreciated the opportunity afforded them to see the biggest plane of its class in the world make its first trial trip this side of the Atlantic. 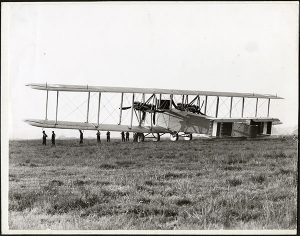 Photo Credit: The Rooms, B21-101 HandleyPage aircraft at Harbour Grace

The landing was made as gracefully as the ascent, the machine taking the ground at 5.47 p.m., having been an hour and seventeen minutes in the air, and covering approximately. 110 miles, averaging ninety miles an hour.

On the return trip the aviators ascended to about 5000 feet, at which height they found the temperature only slightly cooler than at the surface, and the wind practically in the same direction. The landing was made heading eastward, although the wind was westerly, but not strong.

The local papers noted that  Rear Admiral Kerr and Major Brackley says  were ” well satisfied with the result of their trial flight  ”  but  the reality was that during the first trial flight the crew discovered an overheating problem and realized that new radiators would have to be installed.

Speculation  about which  would be off first, Vickers or Handley-Page to set off  was strong.   It was said that “Competition is growing keen” . 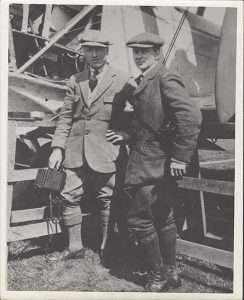 Photo Credit: The Rooms; A-47-15 Arthur Brown and John Alcock

Note:   The dream of Kerr and Brackley to be the first to make the nonstop flight over the Atlantic were dashed just a few days later when on June  14, 1919, Alcock and Brown took off from Lester’s Field , St. John’s at 1:45 p.m. in a Vickers Vimy biplane fitted with two Rolls-Royce engines. The two landed nose down in a bog at to Clifden, Connemara, County Galway, Ireland16 hours later. They received the Daily Mail prize for completing the world’s first nonstop transatlantic flight and were knighted by King George V.

New Exhibit Opening:  June 14, 2019  at The Rooms: Second to None: The History of Aviation in Newfoundland and Labrador.  This country (now province) has played a significant part in the history of aviation.  From the transatlantic flights by Alcock and Brown and Amelia Earhart through the Second World War and Operation Yellow Ribbon, the role of Newfoundland and Labrador is second to none. Through documents, images, artifacts and artwork from The Rooms collections, this exhibition features highlights from the storied aviation history of our Province.