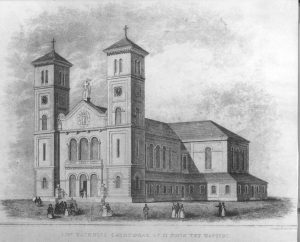 The weather in August of 1896 was so bad that it stirred a “theological” conundrum.

In Newfoundland and Labrador, August 15 is better known as Lady Day.  On the Christian calendar it is the Feast of the Assumption of Mary. On the calendar of the Catholic Church, this day is considered a Holy Day of Obligation, encouraging the faithful attend Mass and abstain from working.

In August 1896 for the many farmers the weather was challenging.  The hay had been cut which was followed by weeks of rain, drizzle and fog.  The hay was the staple diet for an estimated 120, 000 horses, cattle and sheep in the colony. The farmers feared that the hay would be spoiled if it was soon not turned.

When the sun rose on August 15 it looked to be the perfect day for turning the hay, one of the few that  the farmers had seen that August. The farmers had choice stand by their faith or their work?

There were great sighs of relief in the churches on the morning of August 15 as the priests of the diocese went into there pulpits proclaiming a dispensation allowing the farmers to work at turning the hay on this holy day.

The priests read the notice from the bishop that read:

“Owing to the unfavorable weather of the past weeks any persons who have hay cut and in danger of being spoiled may turn it out today”  (Source: Basilica Parish, Book of Publications , August 15, 1896.

Recommended Archives: Search the online database at The Rooms Archives  for descriptions of our archival records and to view thousands of digital photographs. Click the image to begin your search: https://www.therooms.ca/collections-research/our-collections#sthash.gNPievth.dpuf

Recommended Reading: Cows Don’t Know It’s Sunday – Agricultural Life in St. John’s by Hilda Chaulk Murray [A study of both the work life and social life of the farmers of St. John’s this book is a tribute to the farming families who were the mainstay of the city during the first half of the twentieth century]