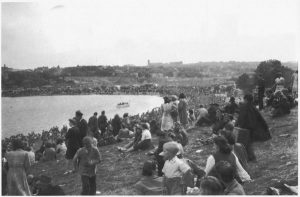 The Banks of Newfoundland –  The Regatta Day Tune

The music is a piece steeped in the tradition of North America’s oldest continuing sporting event the annual Royal St. John’s Regatta. The tune is traditionally played as the crews pass the bandstand on their return to the stakes, though it has been played at the start of the races as well.

In addition to this connection with the Regatta, “The Banks of Newfoundland” is the Regimental March for the Royal Newfoundland Regiment.

“The Banks of Newfoundland” enjoyed a populist appeal in nineteenth-century Newfoundlandthat would have likely astounded Justice Forbes.

Processions, festivals, dinners, soirees, and the like were frequently enlivened with renditions of the popular tune, a tradition that began in the 1820s .