“Trail of the Caribou” Stamps Released 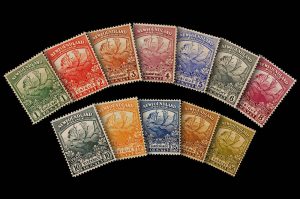 In 1919, W. M Dooley from Charleston, South Carolina, an occasional correspondent with the Evening Telegram, a St. John’s, NL newspaper,  writing under the banner, “Our American Letter”, on February 25, 1919 wrote:

“The new postage stamps of Newfoundland are very beautiful. ’The trail of the caribou’ is a happy phrase and should help to perpetuate the glorious deeds of the Blue Puttees in Turkey, Belgium and France. The present issue approaches in beauty and design the old time fish and seal stamps which were so much sought after by collectors.”

Dooley was referring to a set of stamps that were released a month earlier on (January 2, 1919) by the Newfoundland Postal Department, a 12 stamp commemorative set, to honour the services and memory of the Newfoundland contingent in the war.

The stamps were printed in response to a stamp shortage developed in Newfoundland. The government and in particular The Postmaster-General, J. Alex Robinson (JAR) wanted a new issue that favored a patriotic subject. 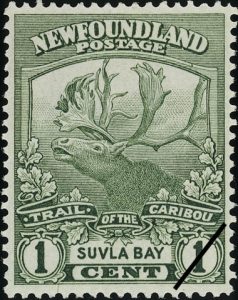 The phrase, “Trail of the Caribou” was created with Lt. Col. Thomas Nangle, Roman Catholic Chaplain of the Royal Newfoundland Regiment. The badge of the Regiment consisted of the head of a caribou over a ribbon lettered “Newfoundland”. Below the caribou is a ribbon entwining oak leaves.

The “caribou” used is certainly magnificent, but perhaps a bit bizarre, the picture of the caribou is a composite of a caribou with moose antlers.

Of the twelve stamps, four commemorate the work of the Naval Forces, and bore the word “Ubique”, meaning everywhere. Newfoundland’s sailors could literally be found everywhere on the sea.

The remaining eight stamps in this series each commemorate a specific engagement in which the Royal Newfoundland Regiment participated. The engagements are: Suvla Bay, Gueudecourt, Beaumont Hamel, Monchy, Langemark, Cambrai, and Combles. all in France. Steenbeck was at Belgium, Suvla Bay was at Gallipoli, Turkey.

The postal rates for letters up to one ounce were, at the date of issue: domestic 3-cents, drop rate 2-cents, UK Commonwealth 3-cents, and foreign 5-cents.   Registered letters were 5-cents and special delivery 10-cents. 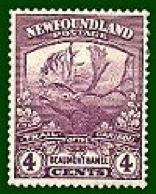 One of the first critics of the newly issued ‘Trail of the Caribou’ stamps was The Governor of Newfoundland, Sir Charles Harris, he went so far as to request the issue be withdrawn from sale since it did not portray any of the “Majesties.”   The Government, however, took the position that there was no slight intended and furthermore that Newfoundland’s stamps were not required to bear their likenesses of their Majesties.

Recommended Collection: The entire 12-stamp issue can be viewed in color at the Canadian Postal Archives website: http://www.collectionscanada.ca/postal-archives/080608_e.html

Recommended Museum Exhibit: The First World War had a profound impact on Newfoundland and Labrador. Our “Great War” happened in the trenches and on the ocean, in the legislature and in the shops, by firesides and bedsides. This exhibition shares the thoughts, hopes, fears, and sacrifices of Newfoundlanders and Labradorians who experienced those tumultuous years – through their treasured mementoes, their writings and their memories. Included in the exhibit  are the ‘Trail of the Caribou’ postage stamps. https://www.therooms.ca/exhibits/now/beaumont-hamel-and-the-trail-of-the-caribou