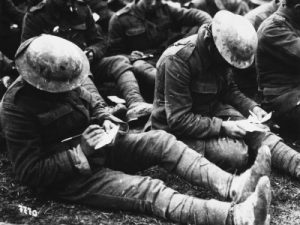 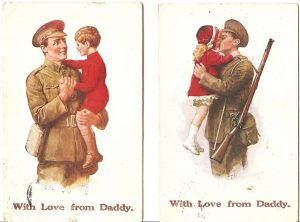 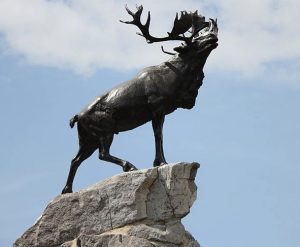 July 1st is a time for celebration for the people of Canada, in Newfoundland and Labrador, the day has a more somber meaning.

Memorial Day commemorates the participation of Newfoundlanders and Labradorians in the Battle of the Somme at Beaumont-Hamel, France.

On July 1, 1916, 801 members of the 1st Newfoundland Regiment fought in that battle and only 68 answered the roll call the next morning.

“We here in Newfoundland have felt the effects of the war… The  dreadful reality of war has come to too many families throughout the land. And there are very few districts in the Island which are not mourning… sons lost on the field of battle. The war is an all absorbing topic, it is never absent from our thoughts. It is like some dreadful nightmare that we cannot shake off. Our prayers and desires are for a speedy end of the war, for an early peace, but for a peace at the same time, which will render impossible another such world calamity as that which we are suffering now.” (Source:  Edward Patrick Roche, 1918  – 107‑2‑6)

Shortly after the Great War, the Government of Newfoundland purchased the ground over which the 1st Newfoundland Regiment made its heroic advance on July 1. Much of the credit is due to Lieutenant Colonel Thomas Nangle. As Director of Graves Registration and Enquiry and Newfoundland’s representative on the Imperial War Graves Commission, he negotiated with some 250 French landowners for the purchase of the site. He had a leading part in planning and supervising the erection, at each of the five Newfoundland Memorials sites in Europe, of a statue of the noble caribou, the emblem of the Regiment, standing facing the former foe with head thrown high in defiance.

Spend some time in the Royal Newfoundland Regiment Gallery to meet descendants of the men and women who served their country 100 years ago. Hear their stories and share your own.

With free admission for the day, we hope many will join us in Memorial Day commemorations with a visit to the Royal Newfoundland Regiment Gallery.

The death of six men in the City of St. John’s on (September 15, 1924) cast a gloom over the city. The local newspapers described St. John’s as a “city of funerals.”  The citizens of St. John’s and the province were mourning the loss of  Gerald J. Whitty and fellow veterans who were struck and killed by a speeding car at Donovans  (on the outskirts of the City).

Gerald  J. Whitty as secretary-treasurer  of the  Great War Veterans Association (GWVA)  of Newfoundland  was  known throughout the province for his advocacy work  for the veterans returning to Newfoundland following the Great War.  He helped run the poppy campaign, begun in 1921, and edited the Veteran Magazine. In 1923 he represented the GWVA in London at the first biennial conference of the British Empire Service League.

He was instrumental in improving pensions and the project of a national memorial to honour Newfoundland’s war dead.

On the evening of 15 September, Whitty and 13 companions met in a restaurant at Donovans to bid farewell to a friend who was leaving for England.  At 11:00 p.m., he, William King, another prominent Newfoundland veteran, and Chief Petty Officer Robert Lovett of HMS Constance were standing by the bus that was to take the party back to St John’s. Suddenly, a speeding car appeared and struck the three men. Whitty and William King were killed instantly, as were four occupants of the car.

On 18 September, St John’s became a “city of funerals.” In the afternoon, following the burial of William King in the General Protestant Cemetery, the funeral procession continued to Whitty’s residence.

At the War Memorial  on Water Street that he was instrumental in having established , a short halt was made and wreaths placed. Whitty was buried in Belvedere Cemetery.

At the graveside, Father Thomas Nangle observed that veterans had lost “their best friend and advocate.”

Recommended Archival Collection:  At the Rooms Provincial Archives Division explore VA 157 an album of photographs relating to the experience of Gerald J. Whitty.

Of the five memorials established in France and Belgium in memory of major actions fought by the  Newfoundland Regiment, the largest is the thirty hectare site at Beaumont-Hamel, nine kilometres north of the town of Albert. This site commemorates all Newfoundlanders who fought in the Great War, particularly those who have no known grave. The site was officially opened by Field Marshal Earl Haig on June 7, 1925.

Shortly after the Great War, the Government of Newfoundland purchased the ground over which the 1st Newfoundland Regiment made its heroic advance on July 1.

Much of the credit for  this and the other memorials is due to (Reverend) Lieutenant Colonel Thomas Nangle, a Roman Catholic priest from St. John’s who as Director of Graves Registration and Enquiry and Newfoundland’s representative on the Imperial War Graves Commission, negotiated with some 250 French landowners for the purchase of the site. He (Father Nangle) had a leading part in planning and supervising the erection, at each of the five Newfoundland Memorials sites in Europe, of a statue of the noble caribou, the emblem of the Regiment, standing facing the former foe with head thrown high in defiance.

The landscape architect, who designed the sites and supervised their construction, was Mr. R.H.K. Cochius, a native of Holland living in St. John’s, Newfoundland. The caribous were the work of the English sculptor, Basil Gotto. He also executed the statue of the “Fighting Newfoundlander,” which Sir Edward Bowring gifted to the people of St. John’s.

Recommended Archival Collection: What do we have in the ‘Rooms Archives’ on this subject? Type  Beaumont  Hamel  in the search bar here: http://gencat1.eloquent-systems.com/webcat/request/DoMenuRequest?SystemName=The+Rooms+Public&UserName=wa+public&Password=&TemplateProcessID=6000_3355&bCachable=1&MenuName=The+Rooms+Archives

Recommended Exhibit: Beaumont Hamel and The Trail the Caribou. The First World War had a profound impact on Newfoundland and Labrador. It involved thousands of our people in world-changing events overseas and dramatically altered life at home. Our “Great War” happened in the trenches and on the ocean, in the legislature and in the shops, by firesides and bedsides. This exhibition shares the thoughts, hopes, fears, and sacrifices of Newfoundlanders and Labradorians who experienced those tumultuous years – through their treasured mementoes, their writings and their memories.