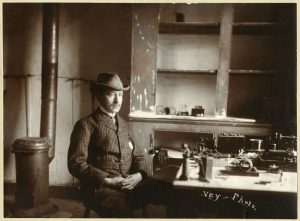 The test signal was sent by electrical engineer John Ambrose Fleming in Poldhu, Cornwall, 3,200 km away across the Atlantic Ocean. It came in through a 121 metre long copper wire antenna trailing from a box kite and out through a radio speaker.

Marconi had set up temporary masts, but high winds had blown them down. The kite contraption worked. Marconi heard the first signal as the faint clicking of Morse code – of the letter ‘S’ –three short clicks– repeated over and over, and he passed the ear piece to his assistant, G. S. Kemp for corroboration.

Marconi first started experimenting with radiotelegraphy around 1895 and he realized that messages could be transmitted over much greater distances by using grounded antennae on the radio transmitter and receiver.

Recommended Archival Collection:  At the Rooms Archives Division see  F.37-’37  one of the archival documents is the Proposal of the Canadian Marconi Company to establish a wireless telephone service between St. John’s and Canada, the United States and Great Britain

Recommended Website:  http://www.marconicalling.co.uk/  Marconi Calling is a fascinating exploration of Guglielmo Marconi’s life, his scientific discoveries, the impact of wireless and the development of modern communications