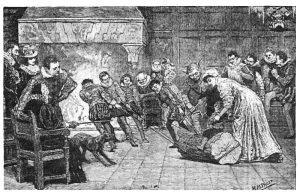 Lewis Amadeus Anspach the author of History of the island of Newfoundland, (London, 1819) the first general history of Newfoundland, observed in his book, a Christmas tradition that he found quite fascinating.  The ancient British custom of the Yule or Christmas log or block that he states “is universally observed by the inhabitants of Newfoundland.”

“On Christmas-eve, at sun-set, an immense block …(junk of birch wood)  is laid across on the back of the fireplace, to be left there till it is entirely consumed: the ceremony of lighting it is announced by the firing of muskets or seal guns before the door of each dwelling house. This, among them, is the prelude to a season of joy and merriment.”

In her 1934 diary account of the tradition Mrs. E. J. Froude of Random Sound reflecting on the tradition of the Yule Log as it was practiced in 1870 wrote:

“The Yule, commonly called the birch junk, was selected to last for the twelve days [of Christmas]. It was after a long search found in the woods where the biggest firs and birches grew and hauled home in such a spirit of triumph. It was then cut in three feet or thereabouts to fit the space on the hearth at the base of the chimney,…”

The tradition continued in many communities – in some places – with variations on the original custom.  In some communities a brand of the back-junk or birch junk or Yule log was taken from the fire on Christmas night, taken outdoors and thrown over the saddle of the roof to ensure safety of the home from fire in the coming year.

What happened to the tradition?  At another point in her diary Mrs. Froude cites the technological innovation which caused the decline of this custom.  She wrote:

“ sixty-four years ago [1870] the first stove began to come into use in the outport. Before this it was all open fireplaces and grates. These times much wood was required for the open fireplaces. The stove was at first regarded with disfavour… The Victory and the Waterloo looked nice when polished but they did not show the fire.”

The new tradition that was born from the dying of the Yule Log tradition was the birth of the Yule log cake, the dessert is usually in the form of a large rectangular yellow cake spread with frosting and rolled up into a cylinder – one end is then lopped off and stood on end to indicate the rings of the “log.”

So when you’re enjoying your Yule Log cake over Christmas holidays think of the old tradition that was lost by the introduction of the stove.

Lost Word:  “Back Junk”: A short log to fit a wood-burning stove or fire-place, often with back, fore or middle as qualifying word . The wood was sometimes quite green, and hence making a fire was quite an art, and required back-junks, fore-junks, middle-junks, triggers, splits, and brands; and the fishermen would sometimes say whoever can build a good fire with green fir can build a boat. 1893 Christmas Greeting. (Dictionary of Newfoundland English)