The first week in March month in St. John’s traditionally saw the population grow by the hundreds as the “men from the bay” began to arrive in the city hoping for a berth on the sealing vessels going out to prosecute fishery.

The city, especially the waterfront, would be busy with activity. Many of the men would be looking for lodgings as they awaited news of a berth on one of the vessels, some consumed a little too much and  there were the inevitable rows between the ‘bay men’ and ‘the townies’ looking for the same work.

It was not only St. John’s that was a hub of activity the other hub was the town a Gambo. In the first week of March, 1907 the St. John’s newspaper, The Daily News reported:

“Last night there were 100 men at Gambo, who had walked from Wesleyville and vicinity, to take the train. About 200 more are expected there, this morning, which will be the last coming from that section.”

The Gambo train station was the terminus for just about all of the sealers who would walk the trek from Wesleyville to the train station in Gambo, “an unpleasant tramp” that took from 24 – 32 hours.

However, there would be much excitement in Gambo, especially among the children. The children would be waiting for the Gambo slide. 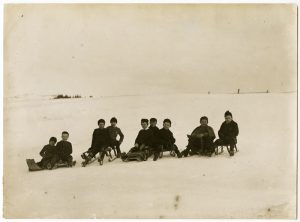 The children knew once they pulled the “Gambo slide” to the train station, the sealers would board the train for St. John’s and the slides would be theirs!

It was not only the men from Wesleyville that were walking into Gambo to catch the train, the Daily News reported on March 6, 1907:

“Eight hundred men will leave Greenspond, Newtown, Pools Island and neighboring places, this morning and will walk over the ice to Gambo, and come into St. John’s by train.”

Walking in the unpredictable weather especially in March month,  the slides not only served to lighten the loads of what the fishermen had to carry, if the weather “turned on them”, they could always burn the slides and use the  wood as a heat source.

One story goes that upon arrival in Gambo  a small group of young men  from Greenspond, Bonavista  Bay had hours to wait for the train.

“So to keep the fire going we broke up our slides which we had used to drag our suitcases or clothes bags on. This kept the fire going for two or three hours … I was some glad when the train finally came, and, I had never been on a train before in my life.”

With the loss of markets for seal products, the hustle and bustle that came with the preparations for outfitting the boats and signing on the crews in St. John’s is no more.

The first week of March on the St. John’s waterfront is now quiet.

Recommended Archival Collection: At the Rooms Provincial Archives read the journal of Dr. William Waddell (MG 1006.1). The journal documents a typical sealing voyage including a description of the vessel and role of the crew.