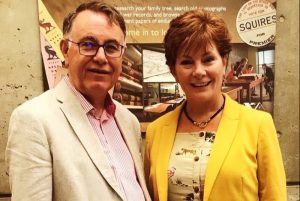 Author Helen C. Escott based the archivist helping her new thriller’s main police investigator on The Rooms’ own Larry Dohey.

(St. John’s, NL)  There’s a new kind of crime fighter in the fictional world, and author Helen C. Escott based the archivist helping her new thriller’s main police investigator on The Rooms’ own Larry Dohey.

Dohey, director of programming and public engagement and author of the popular Archival Moments blog, makes his fictional debut as Larry Morgan in Escott’s book, in which Morgan helps main character Cpl. Gail Mcnaughton delve into the mystery of missing and murdered women cases dating back to the 1950s.

Dohey hadn’t had a chance to read the hot-off-the-press book yet when The Telegram spoke to him Friday. But reading a passage on page 28, when Mcnaughton first encounters Morgan, he laughed, “I’m not yet in my 60s.”

The rest of the physical description is pretty close to the real-life Larry — stylish with a distinct smile, accent and facial expressions.

“(His) hair was a mixture of greyish brown, with flecks of white in his sideburns. His square glasses sat on the end of his nose, and his broad smile made him look like your favourite teacher,” reads the depiction of Morgan.

Escott’s fictional take on the archivist is that he is the son of a murdered woman.

“Archivists typically don’t make it into a book,” said Dohey.

All the time, though, they help researchers, writers, filmmakers and journalists with historical accuracy, and point them in the right direction to track down historical clues.

Dohey said that when Escott approached him, he offered a depiction of what was happening in rural Newfoundland in the 1950s and who would have been travelling around at the time.

“Apparently I just grew in her imagination and made it into the pages of the book,” said Dohey.

He was looking forward to reading the book and finding out how closely Morgan resembles him, but said, generally in literature, if archivists are mentioned, they are stereotyped as being elderly and dowdy, and with thick glasses.

“One thing I do love about this idea of an archivist being in the book is it gives us a chance to show the potential of archives, the contents of the archives and how they can be used by a writer or filmmaker,” Dohey said.

In the past, he has helped solved a few mysteries.

He helped track down the grave of an unknown Portuguese sailor who died in Newfoundland waters.

He also helped someone, after a lot of digging, prove their father-in-law was a First World War veteran.

Dohey is anticipating a little bit of teasing for his newfound notoriety, and had a good-natured response to whether, if he was ever offered, he would go for a TV series as a crime-fighting archivist.

“All of us archivists are always available to help in any way,” he said.

Escott said Larry Morgan wasn’t meant to be a character in the book, but after constantly going back and forth to do research on old newspapers and records, and the help she received from Dohey, she began to wonder, why haven’t the police used an archivist before to solve crime? She said it seems original to feature one in a crime thriller.

And Escott found Dohey so interesting, she had to put him in the book.

“It worked out really well, I got to say. It was meant to be,” she said.

The main character is named for Chris Macnaughton, an RCMP inspector who investigated the murder of St. John’s teenager Dana Bradley. Escott knew Macnaughton, who is now retired, from her career in media relations/communications, from which she is now retired as an RCMP civilian employee. (Bradley’s murder is still unsolved — she went missing on Topsail Road in December 1981 and her body was found in a wooded area off Maddox Cove Road.)

Escott said she would talk to Macnaughton once a month to ensure authenticity, and she goes out of her way to make her characters real.

The character Mcnaughton is caring for a mother with dementia.

The major characters in “Operation Vanished” are also gay.

Escott’s inspiration for the plot came from a fascination with fairy stories in Newfoundland and Labrador, originating from Ireland, Scotland and England, that often explained the disappearance or murder of women and children as being caused by fairies.

One such story revolved around a woman beaten beyond recognition, Escott said.

Though attributed by the community to the work of a fairy, in reality the woman was beaten by a relative, and as was often typical of the time, the crime was dismissed because she wasn’t from the community, the jailing of the man would leave his family destitute and women were too often dismissed as having deserved their fate.

Escott noted women were not officially persons until 1929, and even so, that never slowed the incidence of violence against them.

“There has never been a time when men were not considered persons under the law,” she said.

There were few women in the media in the 1950s to drive equal coverage, she noted, and when a woman did go missing, it would take a Mountie a day or two to reach the community.

Often women were just not considered important enough for crimes against them to be properly reported or pursued.

She hopes Morgan and Mcnaughton will one day team up with the RNC investigator from her first thriller, “Operation Wormwood,” in a future book.