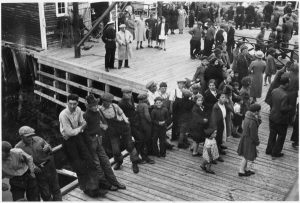 Photo Credit: The Rooms Provincial Archives Division 1.502.050 A Regatta crowd on the north side slopes of Quidi Vidi Lake. One of the events held during Old Home Week, 1904

McAuliffe was born in St. John’s in 1848 and emigrated to Boston in 1866 to study at the Boston Art School.  As a young artist he established a reputation as a “marine water color artist” but also did some “fine religious pictures”.

In his letter he reminded the bishop that he had made a substantial contribution to the Cathedral (now Basilica) with his painting of ‘Ecce Homo” (Behold the Man) that he presented to the Cathedral and the people of St. John’sin 1899.  The large painting contained 75 life size figures showing Christ before Pilate and hung on the west aisle of the Cathedral.

McAuliffe who had never forgotten his Newfoundland roots was passionate about promoting the colony. He lectured on a regular basis in the “Boston States” at clubs frequented by Newfoundlanders.

In October 1903 McAuliffe was very active in promoting “Old Home Week” that was to take place the following year. He suggested that the Old Home Week would not only provide “a great source of revenue” for Newfoundland, but it would also promote a “spirit of patriotism” and be a means of “rolling back the clouds of misrepresentation and calumny indulged in by some of the representatives of the foreign press”. It would also, he argued, be a means of spreading tourist information about the country.

Old Home Week took place from  3-10 August 1904 and attracted some 600 ex-Newfoundland residents from the United States.

A VISIT TO THE CATHEDRAL

McAuliffe would have visited the Cathedral (now Basilica) with his friends from the “Boston States” to see his painting (Ecce Homo) that hung in the west aisle of the Cathedral. Today he would be most disappointed!!  His large painting is missing, likely removed for the renovations to the Basilica in 1954.

Only one of his paintings remains in the province described as a “fine painting”  it depicts  John Cabot’s entry in to the harbor of St. John’s. It was regarded as one of his masterpieces.” This painting is  now in a private collection in St. John’s.

James J. McAuliffe, the great promoter of Newfoundland died in his adopted Boston States in August 1921.

Recommended Tour: Immerse yourself in our culture at Newfoundland  and Labrador’s largest public cultural space.  It’s the place where it all comes together – our history, heritage and artistic  expression. The Rooms unites the Provincial Archives,  Art Gallery and Museum. A place for people,  The Rooms is a portal to the many stories our province has to tell.